by Ross Hammond and Jon Bafus 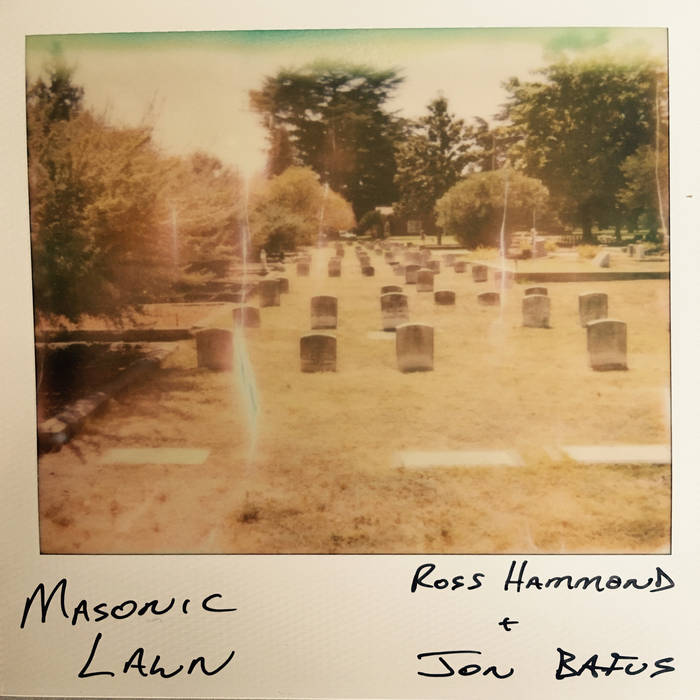 Ross Hammond and Jon Bafus have created a primal, hypnotic, electric folk music that is entirely their own. They mash polyrhythms with Appalachian melodies, roots music and blues into duo improvisations.

Hammond's resonator guitars are amplified on this record to mesh with Bafus' drums. Instead of solos, the duo focuses on collective communication and how to create spontaneous music as a unit.

Available as a download and as a custom CD. CDs include an original Polaroid picture taken inside the historic Masonic Lawn cemetery in Sacramento.

Custom CDs are extremely limited at only 50 copies.

Recorded in December, 2016 by Patrick Hills in Sacramento.

"By melding of the various strands of American music, they show that the idea of diversity and community in music and art bring out the best in all of us."
-Tim Niland, Jazz and Blues Blog

"Masonic Lawn is a mesmerizing musical statement... A perfect soundtrack for a walk in the country and most likely, anywhere else."
- Paul Acquaro, Free Jazz Blog

"...that chiming Resonator sound is by itself worth the listen because Hammond has an ample amount of folk, blues and bluegrass in his approach to guitar and those styles are a good fit for the tools he is using. Bafus takes it further by putting in grooves underneath."
-S. Victor Aaron, Something Else Reviews

"On this release, Hammond unites his multifaceted musical persona with like-minded drummer Jon Bafus for a hip, roots-driven session... an unanticipated musical treat for 2017."
-Glenn Astarita, All About Jazz

"A sound that's both massive and intimate..."
-Aaron Stein, Jambase.com

Bandcamp Daily  your guide to the world of Bandcamp

Benji B talks about his new compilation ‘Deviation Classics’